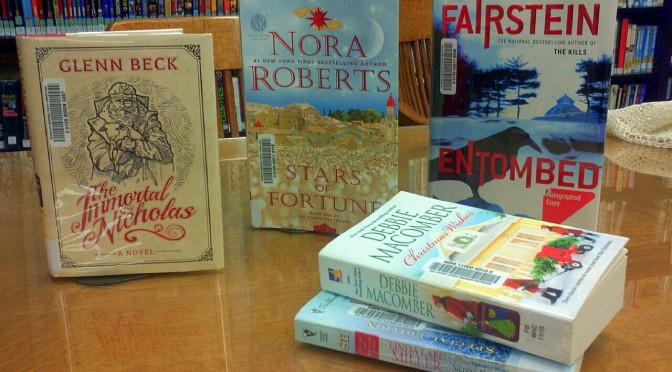 ALL DRESSED IN WHITE, by Mary Higgins Clark
AWAY IN A MANGER, by Rhys Bowen
THE BAZAAR OF BAD DREAMS: Stories, by Stephen King
CROSS JUSTICE, by James Patterson
THE CROSSING, by Michael Connelly
ENTOMBED, by Linda Fairstein
THE GUILTY, by David Baldacci
THE IMMORTAL NICHOLAS, by Glenn Beck
STARS OF FORTUNE (Book One of the Guardians Trilogy), by Nora Roberts
THE MAGIC STRINGS OF FRANKIE PESTO, by Mitch Album
THE MISTLETOE INN, by Richard Paul Evans
THE PHARAOH’S SECRET, by Clive Cussler
TRICK TWENTY-TWO: A Stephanie Plum Novel, by Janet Evanovich